“What you’re supposed to do when you don’t like a thing is change it.”

This prize, awarded to the campaign in 2020, is special to us because we were chosen as Laureates by the young people of the city. Last week, we met with over 500 of those young people to talk about digital dehumanisation, killer robots, and the importance of meaningful human control in a world where automated decision-making is becoming increasingly normal.

Our conversations with these incredible young people have strengthened our resolve to stop killer robots, and we have returned home more determined than ever that the young people of today should not have to live with the consequences of political inaction. We have committed to using the Ypres Peace Prize to build new opportunities for youth leadership within our movement.

Today the @BanKillerRobots team was in Brussels for meetings with parliamentarians from @groen @Ecolo @pvdabelgie @ptbbelgique and the @BelgiumMFA. We look forward to Belgium’s leadership on #KillerRobots because machines shouldn’t kill people #TeamHuman 🖐☠️🤖 pic.twitter.com/LgcxvlZ8gB

While in Belgium we took the opportunity, alongside superb Belgian campaigners Merel Selleslach and Lode Dewaegheneire, to meet with Members of Parliament from the Workers Party, the Socialist Party, and the Green party amongst others, as well as the Ministry of Foreign Affairs. We also participated in a parliamentary hearing, which met to discuss two resolutions proposed to create a national ban on killer robots and support international efforts to negotiate a legal instrument regulating autonomous weapons. It’s clear from our time in Brussels that this is an issue of concern across all levels of government, and that there is a desire to regulate autonomy in weapons systems. Belgium is one of many European states at the moment that have recognized this need, creating a sense of expectation and momentum leading into the upcoming meetings at the CCW in December. 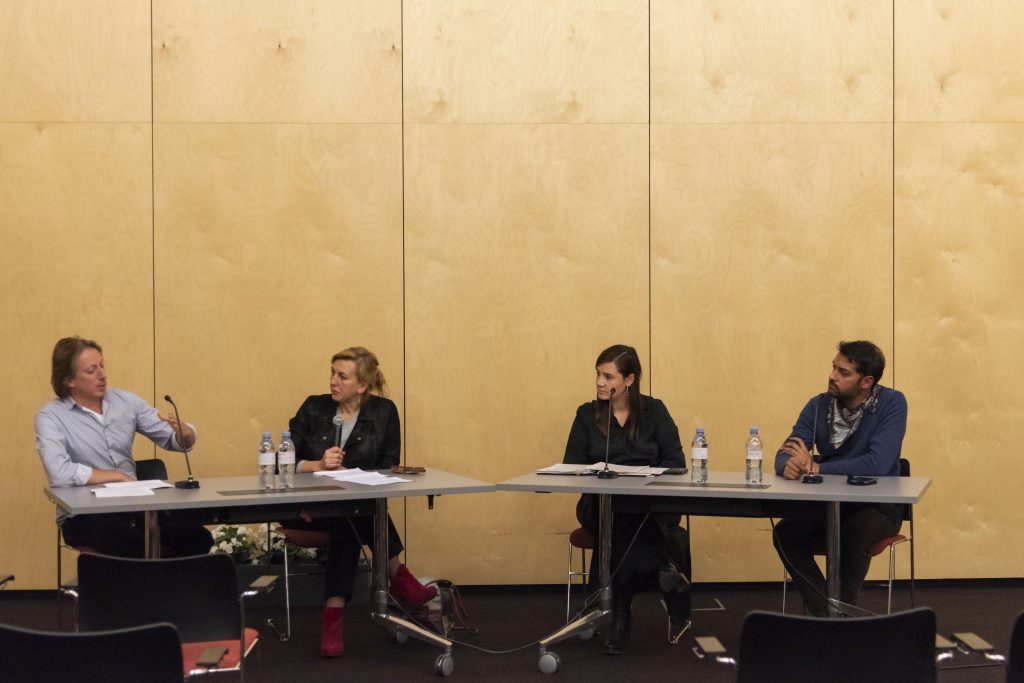 The need for action on regulating autonomy in weapons was one of the questions posed at the public event Killer Robots: Autonomy versus Humanity? hosted by campaign member Pax Christi Vlaanderen on 10 November. Panelists Ousman Noor (Stop Killer Robots); Dr. Tony Belpaeme (Professor of Robotics at University of Ghent); and Laura De Grève (Red Cross Flanders) joined a lively discussion moderated by Inge Vrancken, journalist at the foreign desk of VRT NWS, to discuss how autonomous weapons shift the relationship between people and the technologies we create.

This trip to Belgium provided opportunities to raise public awareness about the risks of killer robots, to hear from young people about the future they want to build, and to discuss with decision-makers the need to take action. But it also provided us with a chance to reflect.

Ypres has an incredible character and history. It is a city that centers on peace, learning, and resilience. Its citizens actively contribute to continued peacebuilding and ensure that they play a role in sharing what they have learned from the immense human cost of past wars. From the first large-scale use of chlorine gas in 1915; the first use of mustard gas on the battlefield of Passchendaele; to other ‘innovations’ in the World Wars like artillery, machine guns, aerial photography, and bombardment – technological developments of the day brought death, pain, and enabled a distancing from the consequences of our violence. 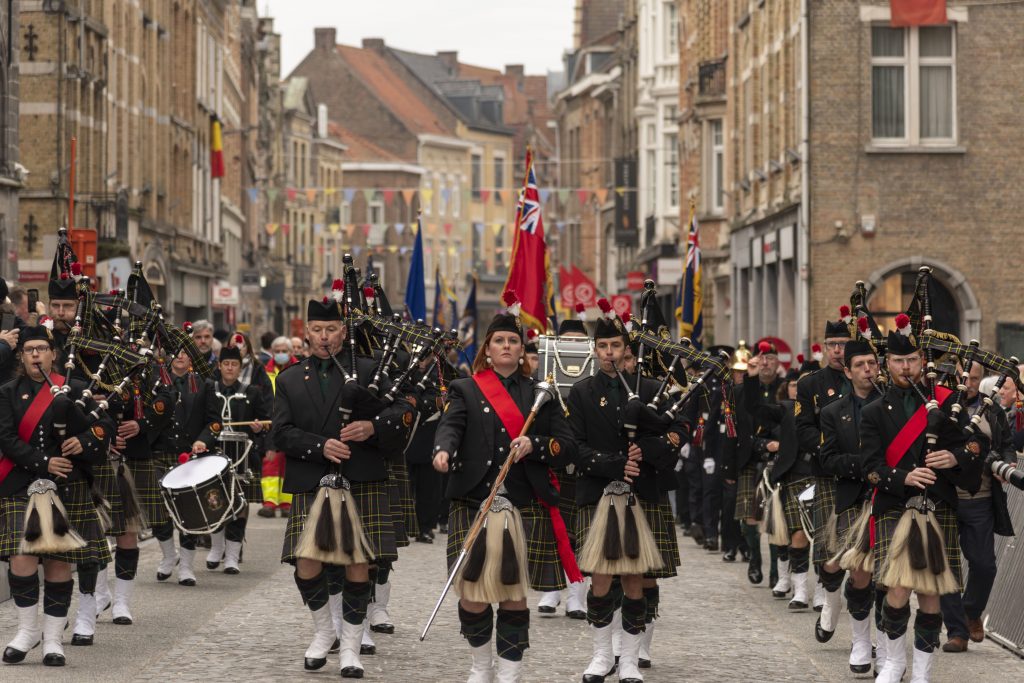 For us, the reality of killer robots never felt more present than when we walked the city, speaking with the descendants of those who had experienced these horrors. The ever-present echoes of the past and the City of Ypres’ forthright approach to growth and progress will stay with us throughout our campaigning lives. We are, once again, on the precipice of evolution in warfare, and we have left Ypres determined to successfully challenge any ‘innovation’ that diminishes meaningful human control over the use of force. 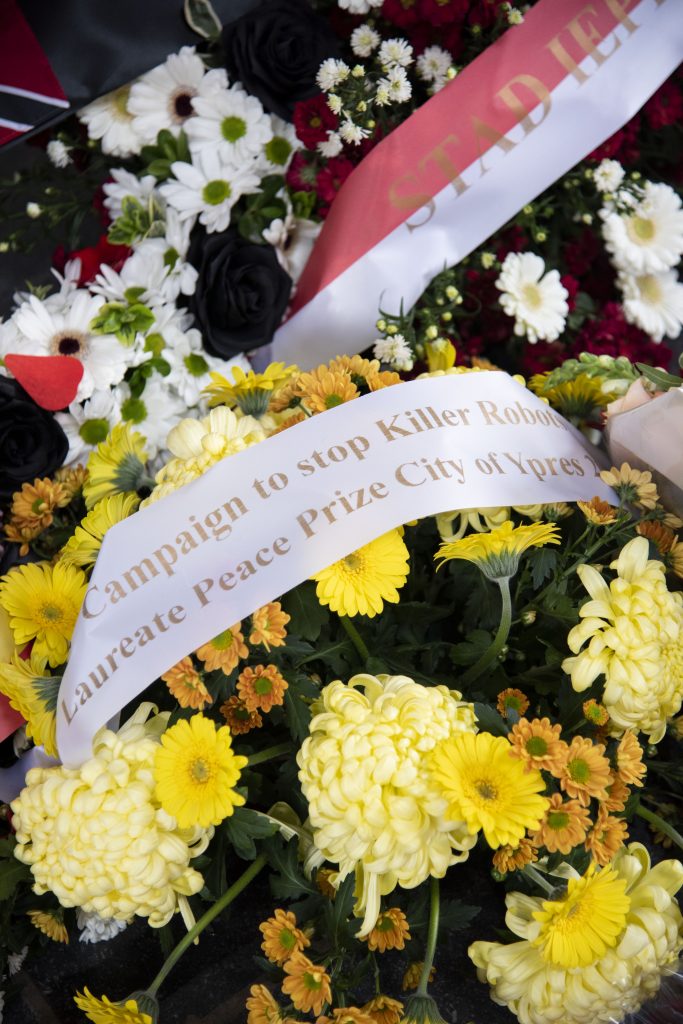 On Armistice Day on 11 November, we were honored to participate in commemoration events as guests of the City of Ypres. At the Last Post Ceremony at the Menin Gate, Isabelle Jones laid a wreath on behalf of the campaign to Stop Killer Robots, remembering the great losses of the war. For the first time, an event was also organized to commemorate civilian loss in the war, and members of the team joined a walk through the city remembering the lives and deaths of the people of Ypres.

The Ypres Peace Prize ceremony was held on the evening of 11 November. The Stockholm International Peace Research Institute (SIPRI) jointly streamed the Ypres Peace Prize ceremony as the closing session of their security conference: Battlefields of the Future: Trends of Conflict and Warfare in the 21st Century. The ceremony began with introductions from Emmily Talpe, Mayor of the City of Ypres and Chairwoman of the Prize Committee, and Dr. Sibylle Bauer, Director of Studies, Armament, and Disarmament at the Stockholm International Peace Research Institute (SIPRI) and member of the Prize Committee.

In her introduction of the campaign to Stop Killer Robots, Dr. Bauer noted,

This peace prize very much creates a linkage between the present and the past, and it is really important to connect back to the battlefields of the past and to highlight the importance of remembrance, of learning from history, which is something that humanity hasn’t been very good at. 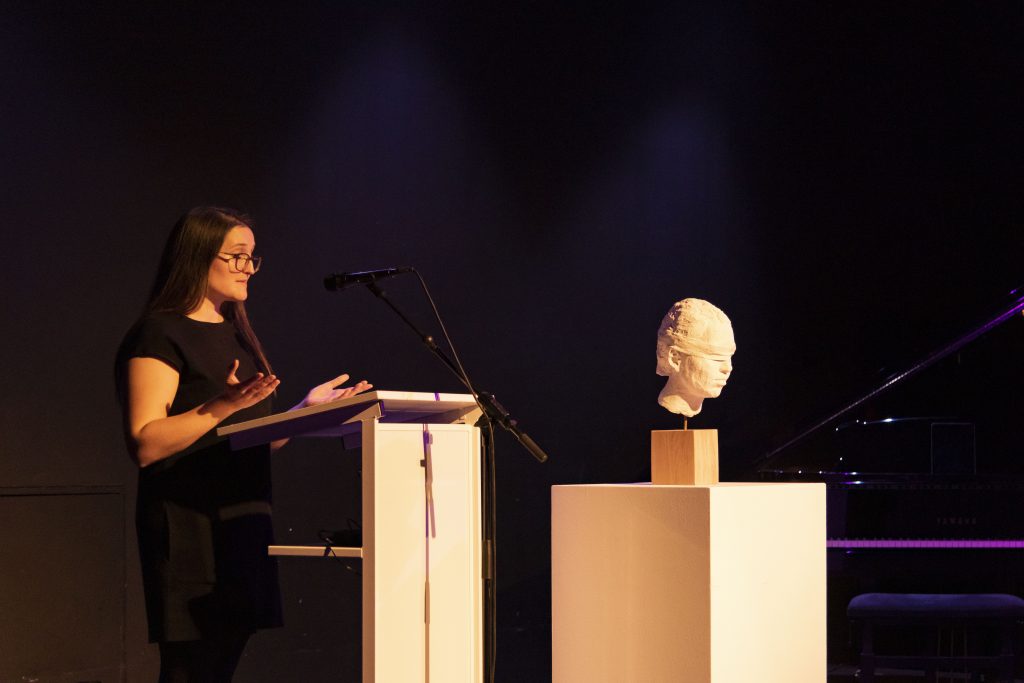 With our campaign to Stop Killer Robots, we have the opportunity to learn from this history and choose a different path for our future. Killer robots are not inevitable. A treaty on autonomous weapons is possible, but it is up to us – all of us – to determine when it happens.

In our Ypres Peace Prize acceptance speech, we quoted Maya Angelou, “What you’re supposed to do when you don’t like a thing is change it.”

The @BanKillerRobots staff team was honoured to accept the #YpresPeacePrize on behalf of our incredible campaigners from around the 🌍. We were awarded this prize by the young people of Ypres and we leave here full of renewed hope and determination to Stop #KillerRobots 🖐☠️🤖 pic.twitter.com/cGUoDD77zl

This is what Stop Killer Robots is doing. Peace takes continued work, diplomatic and political courage, and international cooperation. It requires a willingness to stand against oppression and intolerance, and support justice, human rights, equity, and respect for the law. We are honored to join the group of Ypres Peace Prize laureates, and we take inspiration from them. We are more hopeful than ever for the future we can build, for the lessons that we can learn, and in the strength of our shared movement.

The awarding of the Ypres Peace Prize to us signifies an entrenching determination to Stop Killer Robots and a moment of renewed hope.