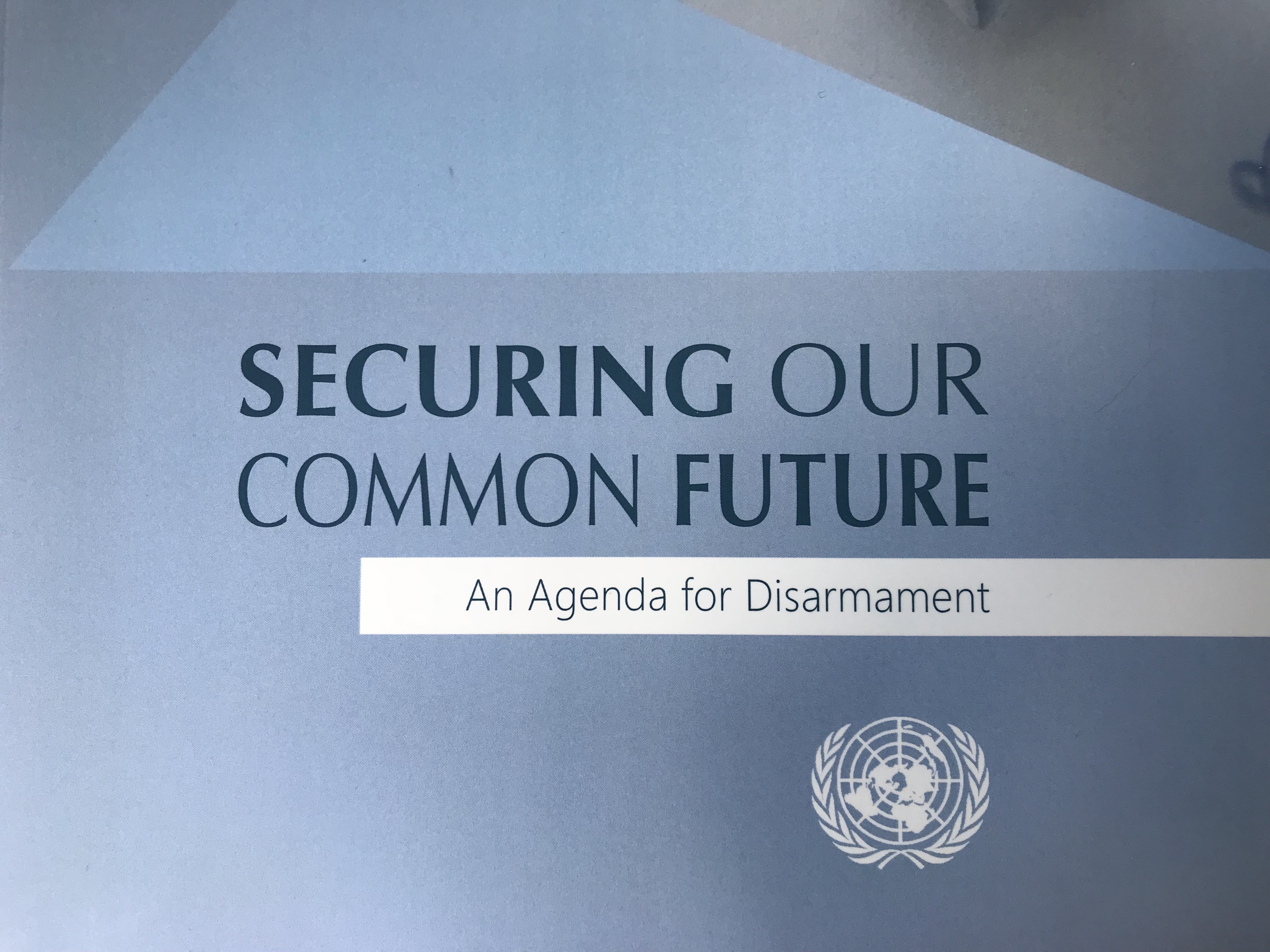 The Secretary-General of the United Nations, António Guterres, is offering to support states to elaborate new measures such as “legally binding arrangements” to ensure that “humans remain at all times in control over the use of force.” The offer is contained in the UN head’s 74-pp disarmament agenda launched in Geneva on 24 May 2018, which describes how “roboticists, technology entrepreneurs, humanitarian actors, civil society and many Governments have raised alarms over the implications posed by the development of lethal autonomous weapon systems.”

In the agenda, the Secretary-General notes that “a growing number of States, including some with advanced military capabilities, have called for a preventative prohibition on lethal autonomous weapon systems” and finds that “all sides appear to be in agreement that, at a minimum, human oversight over the use of force is necessary.”

Some previous UN secretary-generals have actively encouraged efforts to create new international law to address humanitarian and other concerns raised by certain weapons. For example, Boutros Boutros-Ghali was an early endorser of the call to ban antipersonnel landmines, while Kofi Annan continued that support by participating in both the negotiations and signing ceremony of the 1997 Mine Ban Treaty.

Previously, in September 2017, UNESCO’s World Commission on the Ethics of Scientific Knowledge + Technology adopted a consultative report on “Robotics Ethics” that “strongly” recommends that, “for legal, ethical and military-operational reasons, human control over weapon systems and the use of force must be retained.”

The Secretary-General’s proposal is yet another example of the growing support for states to move from talk to action to prevent the development of weapons systems that, once activated, would select and attack targets without human intervention.

Currently, 26 states are calling for a new treaty to ban fully autonomous weapons. More than 100 countries now support moving to establish new international law aimed at retaining some form of human control over weapons systems and the use of force. For the Campaign to Stop Killer Robots, if the human control is truly meaningful both these paths achieve the same outcome of preventing a future of unchecked robotic warfare.

On 27-31 August 2018, more than 70 countries will convene at the Convention on Conventional Weapons (CCW) at the UN in Geneva for their sixth meeting on lethal autonomous weapons systems since 2014.

At the previous CCW meeting in April 2018, there was significant convergence on the need to retain human control over weapons systems and start negotiating new international law to achieve this. Most of the states participating proposed that the CCW begin negotiations on a legally-binding instrument (i.e. protocol or treaty) to address multiple, serious concerns raised by lethal autonomous weapons systems. Austria, China, Colombia, and Djibouti for the first time called for a ban on fully autonomous weapons, although China qualified its support to banning use only and not development or production.

The Campaign to Stop Killer Robots encourages all states to:

What are killer robots?

Armed drones and other autonomous weapons systems with decreasing levels of human control are currently in use and development by high-tech militaries including the US, China, Israel, South Korea, Russia, and the UK. The concern is that a variety of available sensors and advances in artificial intelligence are making it increasingly practical to design weapons systems that would target and attack without any meaningful human control. If the trend towards autonomy continues, humans may start to fade out of the decision-making loop for certain military actions, perhaps retaining only a limited oversight role, or simply setting broad mission parameters.

Last November, the Stockholm International Peace Research Institute (SIPRI) released its first report on the development of autonomy in weapons systems  and identified at least 381 autonomous systems developed for defense purposes, including 175 in weapon systems, most remote-controlled drones. Earlier this summer in Paris at the international Eurosatory arms fair, defense contractors from around the world displayed an array of hi-tech weapons systems incorporating artificial intelligence and autonomous features, from remote-controlled tanks to miniature drones to loitering munitions.

While the serious challenges raised by fully autonomous weapons have gained widespread attention over the past five years yet progress by states to resolve address concerns has been slow. States have identified and explored key legal, operational, moral, technical, and other concerns raised by allowing machines to select and attack targets without further human intervention. There is now widespread agreement with the need to retain some form of human control over future weapons systems and the use of force.

About the next CCW meeting

India’s Ambassador Amandeep Singh Gill will oversee the CCW meeting in his capacity as chair of the CCW’s Group of Governmental Experts on lethal autonomous weapons systems. Ambassador Gill is also executive director of the secretariat for a High-level Panel on Digital Cooperation announced by the UN Secretary-General on 12 July.

Approximately 30 representatives from non-governmental organizations (NGOs) that are members of the Campaign to Stop Killer Robots will participate in the meeting, including 1997 Nobel Peace Laureate Jody Williams, roboticist Noel Sharkey and other technical experts from the International Committee for Robot Arms Control, a co-founder of the campaign. The campaign is a global coalition of 76 NGOs in 32 countries working since April 2013 to preemptively ban lethal autonomous weapons systems, also known as fully autonomous weapons.

UN Geneva-accredited correspondents are invited to attend a Campaign to Stop Killer Robots side event briefing on Tuesday, 28 August to discuss ethical aspects of lethal autonomous weapons systems. Bonnie Docherty will present her latest Human Rights Watch report on how killer robots would fail to meet the Martens Clause, an ethical standard codified in international law for assessing emerging technology.

Please follow the campaign’s social media accounts on Instagram, Facebook, and Twitter. There is no live feed of the CCW meeting or side events, but the highlights will be tweeted using the hashtag #CCWUN