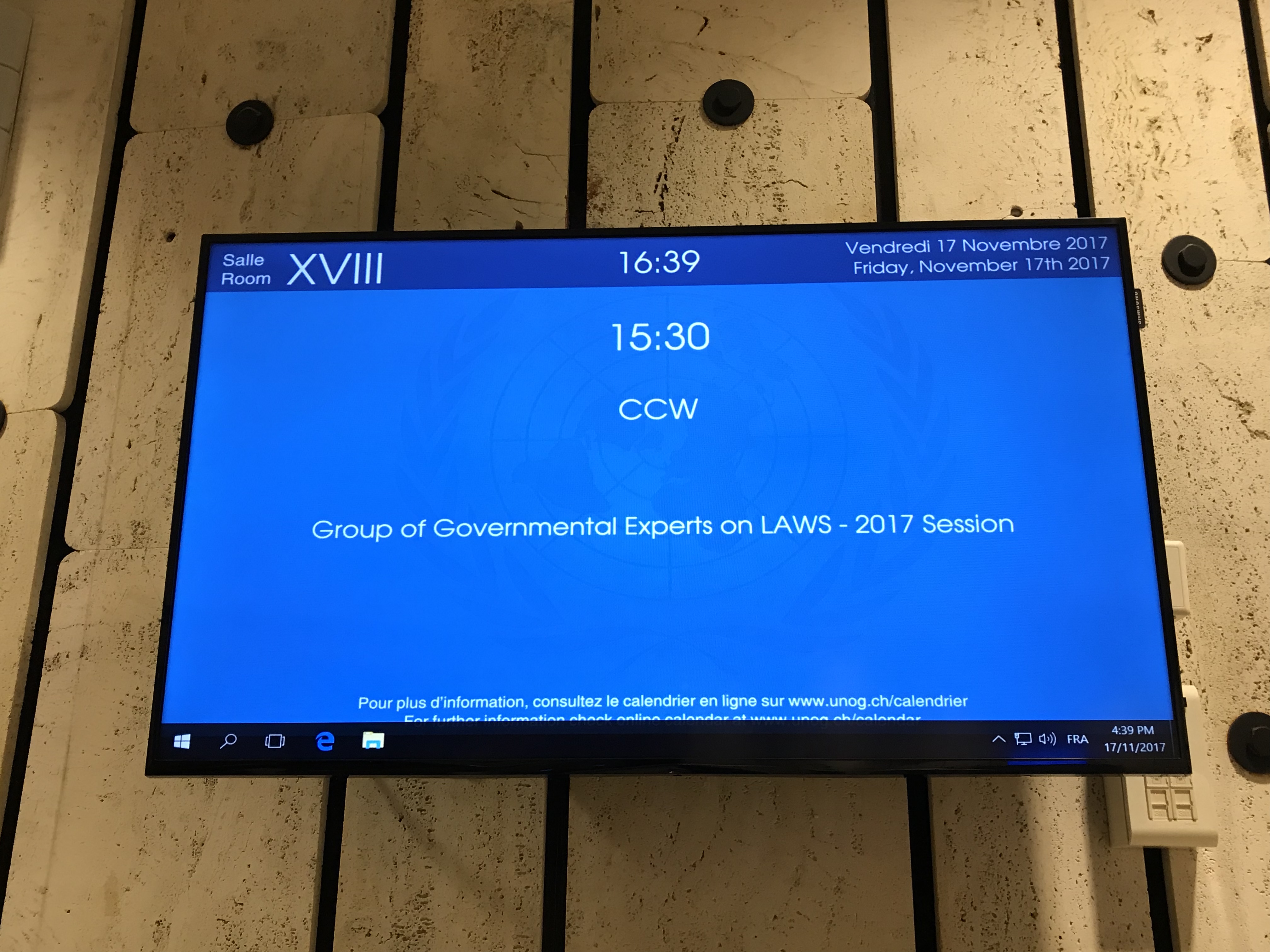 A total of 86 countries participated in a meeting of the Convention on Conventional Weapons (CCW) Group of Governmental Experts (GGE) meeting on lethal autonomous weapons systems that concluded in Geneva today in addition to UNIDIR, the International Committee of the Red Cross (ICRC), and the Campaign to Stop Killer Robots.

Support for a prohibition is growing: 22 countries now support a prohibition with Brazil, Iraq and Uganda joining the list of ban endorsers during the GGE meeting. Cuba, Egypt, Pakistan and other states that support the call to ban fully autonomous weapons also forcefully reiterated the urgent need for a prohibition.

Nearly all states that addressed the CCW meeting accepted that some form of human control must be maintained over weapons systems. The campaign seeks to prohibit weapons that would select and attack targets without further human intervention and hopes that will be the main subject for discussion at the GGE next year as states must make explicit where they draw the line in increasing autonomy in weapon systems.

It is unclear if states can make significant progress at the CCW to swiftly address substantive concerns over fully autonomous weapons if they only meet for up to 10 days next year. States will take a final decision on the CCW’s future on this challenge, including 2018 meeting duration/dates, at the CCW’s annual meeting on Friday, 24 November.

Several states including Brazil, Ireland and Sierra Leone said they see value in discussing the concerns raised by fully autonomous weapons in other fora such as the Human Rights Council.

A handful of states, notably Russia and the United States, said it is too soon to begin negotiating new international law or politically-binding measures. There is serious risk that a few states will hold-back efforts by most states to advance efforts to address fully autonomous weapons concerns at the CCW as its decisions are taken by consensus.

The 2018 GGE meetings should be action-oriented and focus on discussions between states. The 2017 GGE meeting included panels featuring external experts on wide-ranging questions relating to artificial intelligence and emerging technologies at a time when the GGE’s formal setting has raised the expectation of more substantive engagement by various experts working in government.

In 2018, states at the GGE should focus on considering characteristics or elements of a working definition on lethal autonomous weapons systems. It is time for experts from governments to make explicit where they draw the line in increasing autonomy in weapon systems and determine how to retain meaningful human control over weapons systems.

The campaign strongly suggests that states hold at least two separate GGE meetings in 2018, including one during the first quarter or half of the year. The GGE should pave the way to international negotiations on a legally binding instrument. States Parties should agree to a formal negotiating mandate at the end of 2018, and conclude a new protocol by the end of 2019 – a protocol that bans the development, production, and use of fully autonomous weapons.

On Wednesday, 22 November, leaders from the Campaign to Stop Killer Robots including 1997 Nobel Peace Laureate Jody Williams, will hold a side event briefing at UN Geneva in Conference Room XXIV at 13:00. They will provides the campaign’s assessment of the 2017 GGE meeting and comments on the way ahead, including planned CCW mandate for 2018 work to address questions relating to lethal autonomous weapons systems.