Step up the CCW mandate 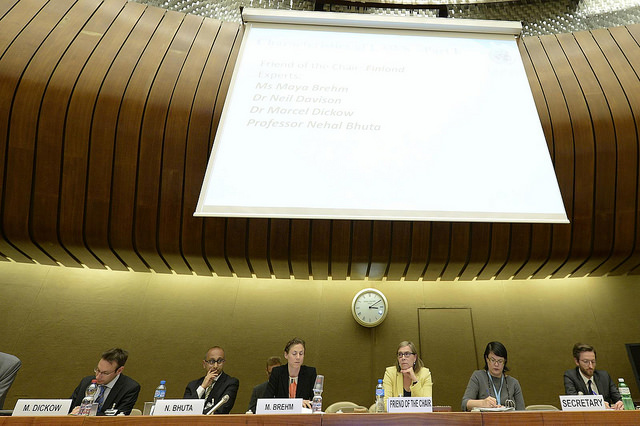 After deliberating for two years on questions relating to “lethal autonomous weapons systems,” the time has come for states to commit to a more substantive process aimed at achieving an outcome that addresses the multiple concerns raised over the weapons. Nations are due to decide on 13 November 2015 if talks on this topic should continue next year at the Convention on Conventional Weapons (CCW) in Geneva.

An ambitious mandate is needed now if states are to act with the urgency this issue demands. The Campaign to Stop Killer Robots is calling for a new international instrument to preemptively ban the development, production, and use of fully autonomous weapons, achieved through a new CCW protocol or another process. It urges nations to agree to a mandate in November that steps up the discussions by establishing a Group of Governmental Experts (GGE).

Such a measure would advance the CCW work to a new level from the “informal meetings of experts” convened in 2014 and 2015, helping demonstrate progress. It would show the CCW can tackle urgent issues on emerging technologies and not just be a discussion forum for its existing protocols. A Group of Governmental Experts could pave the way for a decision by states at their Fifth CCW Review Conference in late 2016 to adopt a negotiating mandate aimed at swiftly achieving a new Protocol VI on fully autonomous weapons.

Open-ended Groups of Governmental Experts have been the established method of work for CCW deliberations over the past two decades on concerns such as landmines, explosive remnants of war, and cluster munitions. Based on that long-standing precedent, a GGE on fully autonomous weapons would be open to all interested states regardless of whether they have joined the CCW’s framework convention and its five protocols, as well as to NGO representatives. Key documents would be translated into the official UN languages. A GGE would therefore help to enable the broadest possible participation by all states, including developing nations, as China and others have requested.

At the CCW’s second informal meeting of experts held on 13-17 April 2015, there was consensus that the talks on fully autonomous weapons should continue in 2016, with no state suggesting that further work is not needed or undesirable. Most states that spoke in a final session on the “Way Forward” explicitly called for the establishment of a Group of Governmental Experts, while three nations–India, France and the UK–requested the status quo. China and Russia did not indicate the mandate they could support, while the US said it was flexible and could support a GGE.

A handful states–notably Germany and the US–suggested that consideration be given to discussing transparency measures and national-level weapons reviews required by Article 36 of Additional Protocol I (1977) of the 1949 Geneva Conventions. Yet these measures alone are not nearly enough to deal with the multiple challenges posed by fully autonomous weapons. As the ICRC observed in its concluding statement to the 2015 CCW meeting, efforts to encourage implementation of national legal reviews are no substitute for CCW states to consider possible options at the international level to address the legal and ethical limits to autonomy in weapon systems.

Between now and November, the CCW’s implementation support unit will distribute a report on the April 2015 CCW experts meeting prepared by its chair Ambassador Michael Biontino of Germany in his personal capacity. The nature of the work going forward, content of the future mandate, and amount of time to be dedicated to this work in 2016 will be the subject of consultations led by Sri Lanka’s Ambassador Ravinath Aryasinha, chairperson-designate of the CCW’s annual meeting in November.

There are 121 CCW states parties to the CCW, while five countries have signed but not ratified. Algeria is the most recent country to accede to the CCW and three of its protocols in 6 May 2015. In June, the Campaign to Stop Killer Robots completed its report on activities at the CCW’s 2015 experts meeting, which is linked below along with other records of the meeting.