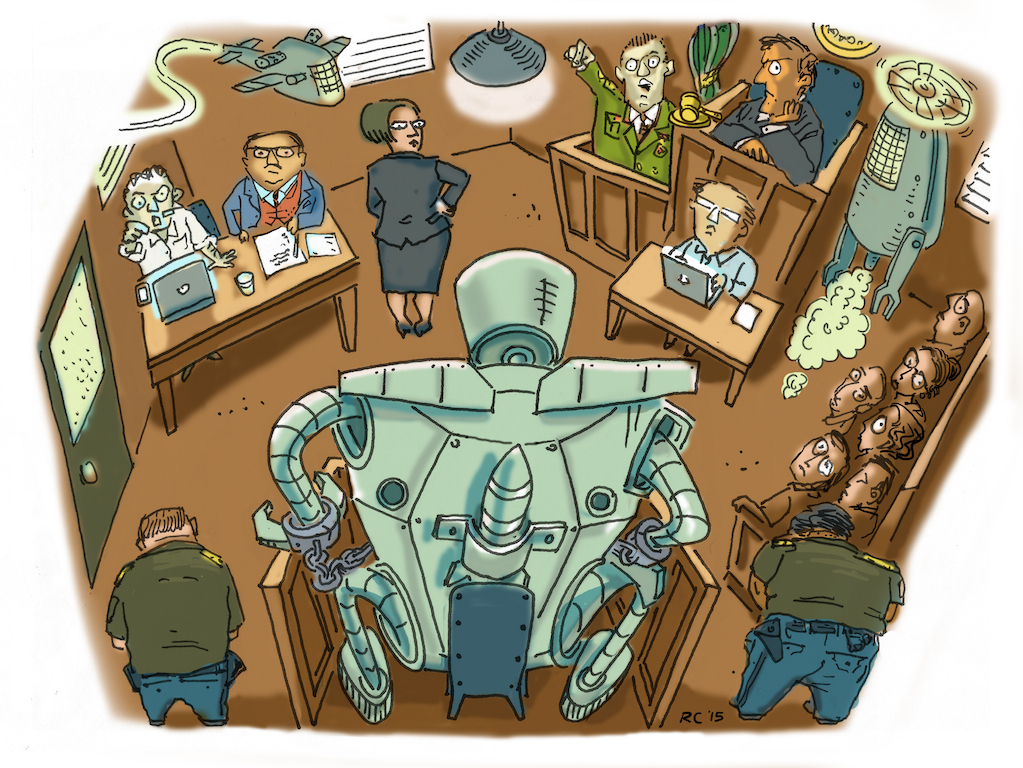 A second round of multilateral talks on concerns over weapons systems that would select and attack targets without further human intervention opened on Monday morning at the United Nations (UN) in Geneva. The meeting of experts on “lethal autonomous weapons systems” is considering questions relating to the emerging technology of these weapons, but there is not yet a negotiating mandate. Based in large part on this week’s talks, states will decide at the CCW’s annual meeting on 13 November 2015 on whether and how to continue the talks which saw the first experts meeting held in May 2014.

Many of the 120 states that are part of the Convention on Conventional Weapons (CCW) are participating in the 2015 CCW meeting of experts, which is chaired by Germany’s Ambassador Michael Biontino who has enlisted “friends of the chair” from Albania, Chile, Hungary, Finland, Sierra Leone, South Korea, Sri Lanka, and Switzerland to chair thematic sessions on a range of technical, legal, and overarching issues including ethics and human rights.

The meeting opened on Monday morning with an address by outgoing UN disarmament chief Ms. Angela Kane. Then 32 countries and the European Union provided statements in a general debate as well as the UNIDIR, UNICRI, the International Committee of the Red Cross (ICRC), and six co-founders of the Campaign to Stop Killer Robots: Article 36, Human Rights Watch, International Committee for Robot Arms Control (ICRAC), Mines Action Canada, PAX, and the Women’s International League for Peace and Freedom (WILPF).

Several autonomous weapons systems with various degrees of human control are currently in use by high-tech militaries including the US, China, Israel, South Korea, Russia, and the UK. These states are all part of the Convention on Conventional Weapons and have all spoken at the 2015 experts meeting this week with the exception of Russia.

At the campaign’s opening briefing, Nobel Peace Laureate Ms. Jody Williams of the Nobel Women’s Initiative, a campaign co-founder, rejected the notion that autonomous weapons systems are “inevitable” stating “this is a decision that we as human beings can make. It is a decision that we must make. We must not cede the power of life and death over other human beings to automous machines of our own design. It is not too late.”

The session proved to be one of the most engaging this far at the 2015 experts meeting. The UK made a detailed intervention that included the statement that it “does not believe there would be any utility in a fully autonomous weapon system.” France said it has no plans for autonomous weapons that deploy fire, it relies entirely on humans for fire decisions.

Three states that have explicitly endorsed the call for a preemptive ban on lethal autonomous weapons systems have reiterated that goal at this meeting (Cuba, Ecuador, and Pakistan), while Sri Lanka said a prohibition must be considered. There have been numerous references to the CCW’s 1995 protocol banning blinding lasers, which preemptively banned the weapon before it was ever fielded or used.

The meeting opened with presentations on the state of technology by three experts, including artificial intelligence researcher Prof. Stuart Russell and Mr. Paul Scharre, co-author of the 2012 US Department of Defense policy directive on autonomy in warfare. A Tuesday morning session on technical aspects saw women for the first time speak as experts on the lead-off panel, with Prof. Heather Roff and Ms. Elizabeth Quintana speaking on military aspects, in addition to Col. Wolfgang Richter, who also addressed the previous experts meeting in 2014.

The Campaign to Stop Killer Robots held side event briefing on Tuesday, 14 April to consider why autonomous weapons systems are ethically unacceptable.

Campaign members have prepared new publications for the 2015 CCW experts meeting exploring a range of related issues, including:

Representatives will hold a final briefing at 13:00 on Friday in Conference Room XXIII.