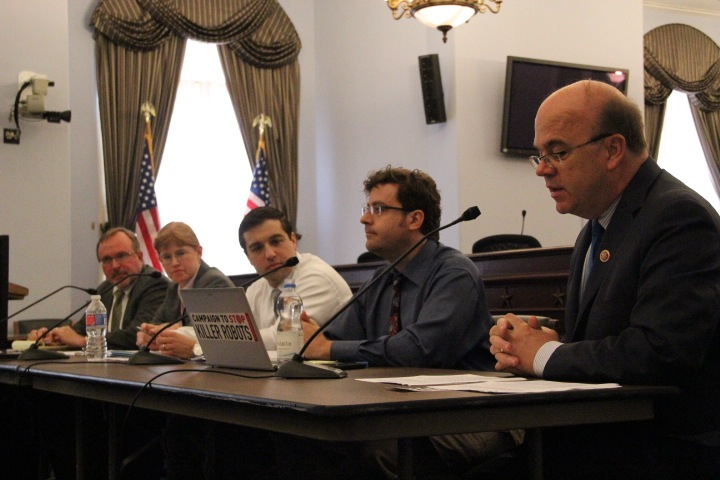 On Tuesday, 15 July, Representative Jim McGovern (D-Mass.) convened a “special briefing on killer robots” to discuss issues surrounding the development and use of fully autonomous lethal weapons. Roughly 65 people attended the briefing held in the Cannon House Office Building of the US Capitol from various Congressional offices as well as from the State Department and Department of Defense, including Defense Advanced Research Projects Agency (DARPA). The panel that provided the briefing featured the author of the 2012 Department of Defense policy on autonomous weapons and three experts from the Campaign to Stop Killer Robots.

In his opening remarks, Rep. McGovern clarified that he became aware of the killer robots challenge “not because of its catchy name, but as Congress was wrestling with the moral and legal questions surrounding the use of drones to kill human beings abroad.” He clarified that the purpose of the briefing was not to talk about weaponized drones that “in their current form and use have what we call ‘a man in the loop.'” Rather, the briefing aimed to look what happens when the “human element” is removed by focusing on weapons “that would be able to select and attack targets on their own – in essence, lethal machines that would be able to target and kill people without human intervention.”

Each panelists spoke briefly before Rep. McGovern opened the floor for questions:

There were several questions covering a range of concerns including the viability of an international treaty, status of research and development by the US, concept of meaningful human control, and views of the scientific community on the need for regulation. Rep. McGovern concluded the event by noting that “it’s not far-fetched to think about lethal autonomous weapons systems now” in order to consider consequences of this technology and what can be done.

The briefing is believed to be the first on the Hill on the topic (by civil society representatives, in any case), but it does not mark the first initiative on killer robots by an elected representative.

Earlier this year the Hawaii state legislature considered a resolution calling for a moratorium on lethal autonomous robots.

On 27 February 2014, Hawaii state Representative Angus McKelvey introduced a draft resolution urging the US government to “place a moratorium on the development, production, deployment, and use of lethal autonomous robotics” and “encourage other nations to do the same until an internationally agreed upon framework on the future of autonomous robotics has been established.” The Hawaiian legislature’s Committee on Veterans, Military, & International Affairs, & Culture and the Arts voted to pass the measure on the resolution on 2 April. The House adopted HD 1 the next day then the Senate received the resolution and referred it to  committee for further consideration. Representative McKelvey intends to re-introduce the draft resolution in the next legislative session, starting in January 2015.

Rep.  McKelvey told the campaign that he drafted the resolution after reading the 2013 scientists’ call to action by ICRAC and the report by a UN special rapporteur Christof Heyns on lethal autonomous robototics, which urged all nations to enact moratoria on the weapons.

The briefing was covered by media, including Roll Call and the National Journal.