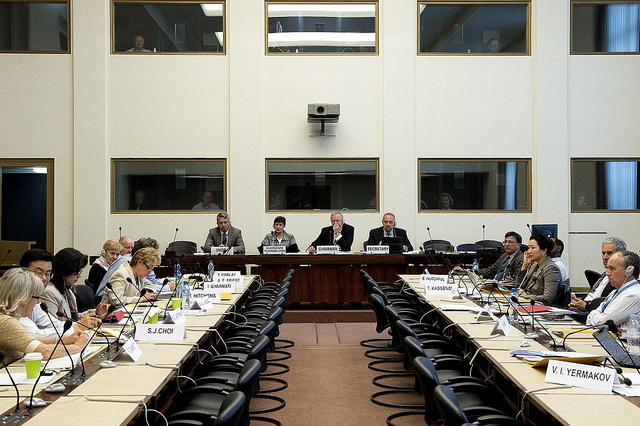 United Nations disarmament chief Angela Kane stated this week (2 July) that “there is a widespread view” that weapons systems that have the capability of selecting and attacking targets without human intervention “must be subject to meaningful human control.” The High Representative for Disarmament Affairs made her remarks on 2 July at a meeting of UN Secretary-General Ban Ki-moon’s Advisory Board on Disarmament Matters. The Campaign to Stop Killer Robots addressed the Board two days later.

Kane said the killer robots challenge “offers an opportunity for the Advisory Board to make a much needed contribution to an ongoing debate that could ultimately lead to the further strengthening of international humanitarian law and the protection of civilians.” She has encouraged the Board to consider how nations can take action now to address fully autonomous weapons as “the mere existence of an international legal obligation is often not enough” to rein in the technology. This week Kane again noted that the question of whether the weapons could be “in conformity with the rules of international humanitarian law remains unresolved.”

In a presentation on 4 July on behalf of the Campaign to Stop Killer Robots, Maya Brehm of Article 36 welcomed the Board’s continued interest in the disarmament and security implications of emerging technologies and affirmed the campaign’s objective of a comprehensive and pre-emptive ban on fully autonomous weapons. Brehm said the campaign welcomes the strong interest by governments in discussing concerns relating to the weapons, as shown by the first meeting on lethal autonomous weapons systems chaired by France at the Convention on Conventional Weapons (CCW) in May 2014.

The Campaign to Stop Killer Robots supports a continuation of the CCW process and welcomes efforts in other fora, such as the Human Rights Council, as well as by international agencies such as the UN Institute for Disarmament Research (UNIDIR).

In the presentation, Brehm also emphasized how the imperative of maintaining meaningful human control over targeting and attack decisions has emerged as the primary point of common ground in the international debate and suggested structuring discussion around the identifying parameters for the exercise of human control. This could help to indicate temporal, spatial, context- and effects-related boundaries beyond which human control is no longer meaningfully exercised over target identification, selection, and engagement.

Brehm noted that “inclusiveness and breadth of perspectives has a number of concrete policy implications” and recommended that further discussions on autonomous weapons engage a broad range of actors to ensure a diversity of views. She urged that greater efforts be made “to ensure that a diversity of gender and regional identities are represented” in the emerging debate over the weapons.

The first CCW experts meeting on autonomous weapons was a significant in that it marked the first time that governments have considered the matter in a multilateral setting, but it was notable for the lack of any women experts in the formal agenda. The Campaign to Stop Killer Robots believes that excluding the voices of women and other gender identities from global policymaking efforts on peace and security runs counter to UN Security Council Resolution 1325.

In late June 2014, Kane discussed the campaign’s concerns over the lack of gender diversity in diplomatic meetings, experts groups, publications, and media coverage relating to autonomous weapons in a meeting with Nobel Peace Laureate Jody Williams of the Nobel Women’s Initiative and campaign coordinator Mary Wareham from Human Rights Watch. Kane described initiatives by the UN Secretary-General to increase gender diversity at the United Nations as well as the advice and resources that the Office for Disarmament Affairs makes available for governments pursuing disarmament and arms control objectives. They discussed the Article 36 initiative that has collected pledges from almost 50 men committing not to accept invitations participate on all-male disarmament panels.

The July 2014 meeting marks the third consecutive time that members of the Campaign to Stop Killer Robots have briefed the Board, which meets twice a year. Physicist Dr. Mark Avrum Gubrud and philosopher of technology Dr. Peter Asaro from campaign co-founder the International Committee for Robot Arms Control (ICRAC) both presented to the Board’s previous meeting in New York in early March 2014, while Brehm addressed the Board in June 2013 to introduce the newly-launched campaign and its call for a ban on fully autonomous weapons.

The Board’s July 2013 (A/68/206) report states that “the United Nations should be seized of the implications on international peace and security of rapidly emerging new technologies” and recommended that the UN Secretary-General “take this issue in hand and emphasize the possible inherent dangers of weapon systems whose course of action is determined by machine algorithms.” The Board recommended that the Secretary-General commission a study on “increasingly autonomous weapons technology” and suggested the CCW as a forum for further discussion.