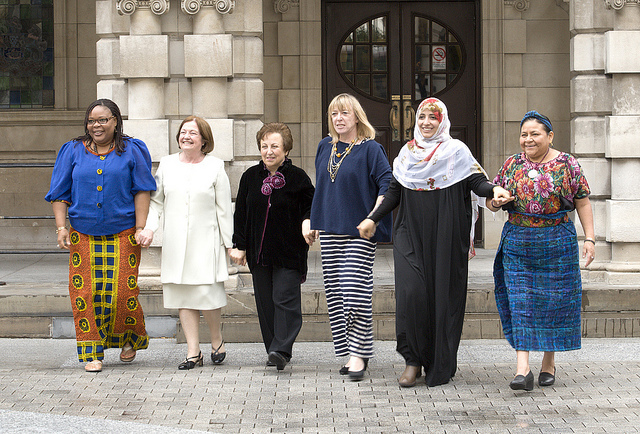 More than 20 Nobel Peace Prize Laureates have endorsed a joint statement calling for a ban on weapons that would be able to select and attack targets without meaningful human control. The Laureates warn that lethal robots would “completely and forever change the face of war and likely spawn a new arms race” and ask, “Can humanity afford to follow such a path?” They express concern that “leaving the killing to machines might make going to war easier and shift the burden of armed conflict onto civilians.”

The Laureates urge public debate about the ethics and morality of autonomous weapons systems. They welcome the establishment of the Campaign to Stop Killer Robots and “whole-heartedly embrace its goal of a preemptive ban on fully autonomous weapons that would be able to select and attack targets on their own.”

Signatories to the statement include Jody Williams and the International Campaign to Ban Landmines, who were awarded the prize in 1997 for their efforts in helping to bring about the Mine Ban Treaty. Others signatories include Mairead Maguire (1976), Betty Williams (1976), Rigoberta Menchú Tum (1992), Shirin Ebadi (2003), Leymah Gbowee (2011), and Tawakkol Karman (2011), who together with Williams are members of the Nobel Women’s Initiative, a co-founder of the Campaign to Stop Killer Robots. Signatories include South Africa’s Archbishop Desmond Tutu (1984) and former presidents Lech Walesa of Poland (1983), Oscar Arias Sánchez of Costa Rica (1987), F.W. de Klerk of South Africa (1993), and José Ramos-Horta of Timor-Leste (1996).

Campaign to Stop Killer Robots co-founder the Pugwash Conferences on Science and World Affairs (1995) has endorsed the statement with the signature of its president Jayathana Dhanapala, former United Nations disarmament chief. Other organizations to endorse the statement are the American Friends Service Committee (The Quakers) (1947), Amnesty International (1978), International Peace Bureau (1910), and International Physicians for the Prevention of Nuclear War (1985).

The statement was delivered by Williams last month in her remarks to the first multilateral meeting held on the matter of “lethal autonomous weapons systems.” Foreign Policy has published the following piece by Williams reflecting on the talks…

“Even Killer Robots Have a Gender Gap” by Jody Williams, Foreign Policy, 11 June 2014

When the first multilateral meeting on the development of lethal autonomous weapons systems (LAWS) convened at the U.N. in Geneva in May, not one woman was called to speak on the expert panels that informed the discussions. The weapons, more popularly known as “killer robots,” are not a gendered issue — as all matters of conflict do, they will impact women and men alike. Yet it seems that no “qualified” woman could be found to act as one of the 18 purported experts that the U.N. treaty organization called to give their views on the implications these weapons have for ethics, laws of war, and technical and operational issues.

Though independent groups and activists have as a whole made headway in being heard on disarmament and security issues, women too often remain sidelined in official and semi-official settings. The worldwide campaign against LAWS is a perfect example — and a model for how to push back.

The previous November, states parties to the Convention on Conventional Weapons (CCW) had agreed to hold informal talks on the weapons after just seven months of pressure by the Campaign to Stop Killer Robots, launched in April 2013. Government delegations, U.N. agencies, the International Committee of the Red Cross, and nongovernmental organizations under the banner of the campaign participated.

These weapons are already under development by several countries. They would completely eliminate a role for human judgment and compassion in making decisions about when to use a lethal weapon, endangering civilians both in wartime and in policing situations. The result of a misjudgment would most likely be fatal. Such weapons should be banned before it is too late to halt their development.

Officially, only the Norwegian government protested the exclusion of women, citing highly touted — if little practiced — U.N. resolution 1325 on women, peace, and security. At the same, however, the government pointed out that all of the so-called side events, organized by the Campaign to Stop Killer Robots (CSKR) on the same topics covered by the official sessions, were gender balanced.

Behind the scenes, several men from the CSKR were quietly told that the reason that all of the “expert presenters” were men was because “there were no suitable women to fill the slots.”

But just what does it mean that there were no suitable women to speak as experts on peace security? And why are governments still resisting women’s inclusion?

Resolution 1325, cited by the Norwegians, “[u]rges Member States to ensure increased representation of women at all decision-making levels in national, regional and international institutions and mechanisms for the prevention, management, and resolution of conflict.” Since its passage, though, precious few peace negotiations have included any women at all. And as demonstrated in the Geneva discussions on LAWS, we remain “unsuitable” to even give an expert opinion on ethics or the laws of war, let alone on robotic weapons themselves.

Despite all the bluster and high-sounding words about the need for “diversity,” “inclusion,” and for “empowering women,” neither the bluster nor the words have resulted in meaningful change.

To be sure, U.N. officials and governments alike credited the work of the campaign for bringing the issue to the fore and spurring the talks. The campaign had taken an issue that had not been publicly discussed and within a year brought it to the halls of the U.N. for this first “expert session” on the weapons.

The recognition and increased acceptance of the role of independent groups and activists in arms control and disarmament discussions is in many ways a tribute to the hard work of the International Campaign to Ban Landmines, of which I was the founding coordinator, and the Cluster Munition Coalition, each of which worked closely with governments, U.N. agencies, and the International Committee of the Red Cross (ICRC) to successfully ban landmines in 1997 and cluster munitions in 2008.

Needless to say, the CSKR publicly protested the lack of women among the experts in the Geneva sessions — and we were joined by one of the expert presenters as well. The official response to our questions about why women were not included was weak and unconvincing, and officials indicated that we should be pleased that at least one of the moderators of an expert panel was a woman from one of the government delegations.

While governments continue to resist gender balance, nongovernmental organizations and activists will continue to press for change. In fact, as a result of the Geneva talks, campaign members are taking an even more active stance to end gender discrimination in global policymaking.

One of the founding members of the campaign, a British organization known as Article 36 — referring to a Geneva Convention protocol regarding new weapons and methods of warfare — began compiling a list of men working in the field of peace and security who would make a commitment not to speak on panels that include only men.

Within days of opening the list, more than three dozen men had already signed on — and the list is being shared beyond members of the Campaign to Stop Killer Robots. Other campaign members have begun compiling lists of women working in these areas to facilitate the ability of governments to find “suitable” women experts.

Government and U.N. bodies need to recognize the critical role women play in helping shape disarmament, peace, and security discussions, and to recognize, solicit, and promote women’s expertise in contributing to our own security in an insecure world. That time is well past due — and the reaction to the U.N.’s failure to enforce its standards show that women, and men, aren’t willing to wait any longer.