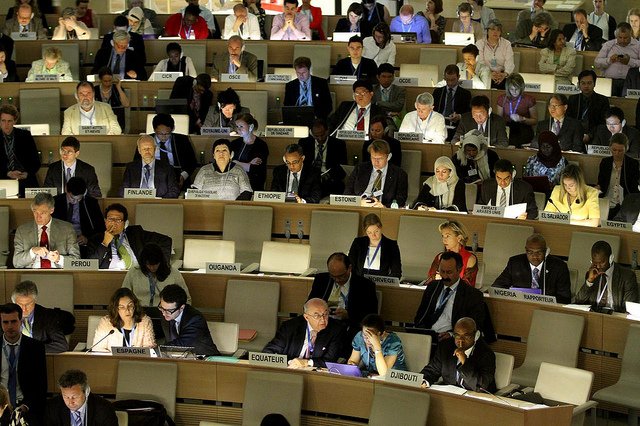 Concerns are increasing over the potential impact of fully autonomous weapons under human rights law, which applies during peacetime as well as armed conflict. Nations are expected to consider the matter at the next session of the Human Rights Council at the United Nations in Geneva, which opens on 10 June. The Campaign to Stop Killer Robots is convening a briefing on “human rights, disarmament, and killer robots” at the UN on June 11 – see the Flyer.

The UN Special Rapporteur on extrajudicial, summary or arbitrary executions, Professor Christof Heyns, is due to present his latest report (A -HRC-26-36) to the the Human Rights Council on 12 June recommending that the body “remain seized” with the issue of autonomous weapons systems and “make its voice heard as the international debate unfolds.” According to the report, fully autonomous weapons pose “far-reaching potential implications” to human rights, specifically the rights to life and dignity. The possibility that the weapons will be used in circumstances outside of armed conflict requires broad consideration by all actors in any fora and the Campaign to Stop Killer Robots supports the report’s conclusion that the weapons must remain on the agenda of the Human Rights Council to ensure that the human rights perspective is considered.

It remains to be seen if nations speaking on the topic at the Human Rights Council on 12 June will propose any specific action. Several countries have indicated their willingness to address the matter in more than one forum.

When Prof. Heyns presented his first report on killer robots at the Human Rights Council one year ago on 30 May, representatives from twenty nations and the Campaign to Stop Killer Robots provided their views on the matter for the first time in a multilateral forum. Several countries–France, Switzerland, the United Kingdom, and the United States–called for the topic to be addressed by the Convention on Conventional Weapons (CCW), which subsequently agreed on 15 November 2013 to begin addressing “lethal autonomous weapons systems” in 2014.

The 2013 report by the UN Special Rapporteur found that action on fully autonomous weapons is urgently needed to reinforce the international legal framework “against the pressure of the future … while it is still possible.” The UN report notes “[T]here is wide acceptance that caution and some form of control of States’s use of this technology are needed, over and above the general standards already posed by international law.” It called on states to place a national moratorium on the testing, production, assembly, transfer, acquisition, deployment, and use of the weapons. The report warned that autonomous weapons could possibly be used in “a domestic law enforcement situation” and/or “used by States to suppress domestic enemies and to terrorize the population at large.” It stated that the weapons could be “intercepted and used by non-State actors, such as criminal cartels or private individual.”

Over the past year since the report was issued, much of the debate over fully autonomous weapons has focused on the weapons’ potential role in armed conflict, raising questions over whether the weapons would ever be able to comply with international humanitarian law, also called the laws of war, but calls have increased in recent weeks for the human rights concerns to be taken into account.

At the first Convention on Conventional Weapons meeting of experts on lethal autonomous weapons systems held at the UN in Geneva on 13-16 May 2014, a number of countries noted the relevance of international human rights law in their statements, including Croatia, Egypt, the Holy See, Mexico, Sierra Leone, and South Africa. Brazil told the meeting that the CCW process on autonomous weapons shouldn’t preclude other UN bodies such as the Human Rights Council from taking action in accordance with their mandates.

Amnesty International has expressed concern that fully autonomous weapons, including “less lethal” robotic weapons that can result in deaths and serious injuries, would result in unlawful killings and injuries both in situations of armed conflict as well as in law enforcement operations. It has stated that automated weapon systems without meaningful human control would not be able to correctly assess complex policing situations and comply with relevant standards.

The 2014 report by Heyns is available in all UN languages. Compared to the 2013’s report’s extensive analysis and four recommendations on “lethal autonomous robotics,” the 2014 report contains a brief reference to what it now calls “autonomous weapons systems” and recommends that the Human Rights Council “engage with the work done by the disarmament structures in this regard.”

The Campaign to Stop Killer Robots is holding a briefing on Wednesday, 11 June at 17:00 (5:00pm) in Room XXII of Building E at the UN Palais des Nations in Geneva to look at human rights concerns with killer robots in advance of the 12 June presentation to the Human Rights Council of a new report on the matter by Professor Christof Heyns, UN Special Rapporteur on extrajudicial, summary or arbitrary executions. This briefing come less than a month after the first Convention on Conventional Weapons (CCW) meeting of experts on ‘lethal autonomous weapons systems’ was held the UN in Geneva on 13-16 May. Beatrice Fihn of the Women’s International League for Peace and Freedom (WILPF) is moderating this hour-long briefing, which features remarks by Ambassador Simon-Michel of France, Professor Heyns, Kathleen Lawand from the International Committee of the Red Cross and Richard Moyes of Article 36, a co-founder of the Campaign to Stop Killer Robots together with WILPF.