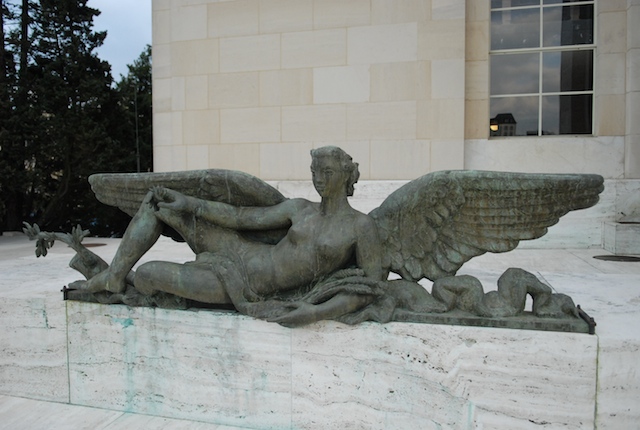 The first multilateral talks on killer robots open at the United Nations in Geneva (UN) at 10:00 on Tuesday, 13 May. Many of the 117 states party to the Convention on Conventional Weapons (CCW) are expected to attend the four-day meeting of experts on “lethal autonomous weapons systems” in addition to representatives from international and UN agencies, the ICRC, regional bodies, and registered non-governmental organizations. The Campaign to Stop Killer Robots delegation includes three dozen experts, many of whom will be speaking in the formal meeting and at daily side events [PDF]. See our press release (12 May) and statement (13 May).

Media events are planned at the beginning and end of the CCW experts meeting:

See the campaign’s media advisory. Campaign to Stop Killer Robots representatives are also speaking at other side events on legal, operational and technical, and ethical concerns over fully autonomous weapons from 13:00-14:30 on 13-15 May in Conference Room XXII. These events and the formal plenary meeting will be tweeted by @BanKillerRobots using the hashtags #CCWUN and #KillerRobots.

The campaign has prepared the following “Frequently Asked Questions” [PDF] on the CCW meeting of experts. Please also see our media page and advisory.

What is the CCW?
The Convention on Conventional Weapons (CCW) is an umbrella convention adopted in 1980 that contains five separate protocols on various weapons and explosive remnants of war. Protocol IV preemptively banned blinding lasers before they were fielded or used and as such provides a relevant precedent for work on fully autonomous weapons. The CCW also provided a useful incubator for efforts to address the humanitarian consequences of antipersonnel landmines in the 1990s and cluster munitions in the 2000s.

Who is part of the CCW?
The 117 states party to the Convention on Conventional Weapons (CCW) includes all five permanent members of UN Security Council and “major players” in terms of those working to actively develop ever more autonomous weapons. The CCW meeting of experts on 13-16 May is open to all nations regardless of whether they’ve joined the framework convention and its protocols. Many of the 21 countries that attended an International Committee of the Red Cross (ICRC) meeting on autonomous weapons systems in late March are expected to actively participate in the CCW experts meeting (Algeria, Brazil, China, Colombia, France, Germany, India, Israel, Japan, Kenya, Mexico, Norway, Pakistan, Qatar, Republic of Korea, Russia, Saudi Arabia, South Africa, Switzerland, UK, and US). CCW meetings are also open to international and UN agencies, the ICRC, regional bodies, and registered non-governmental organizations (NGOs). Several NGOs in the Campaign to Stop Killer Robots have a long history of experience working within the CCW, including global coordinator Human Rights Watch.

What is the CCW meeting of experts and why does it matter?
On 15 November 2013, nations attending the annual CCW meeting agreed to begin working on killer robots when they adopted a report committing to hold a meeting of experts in May 2014 to consider questions relating to the emerging technology of “lethal autonomous weapons systems.” The decision was taken by consensus, which is seen as a rare feat in today’s disarmament diplomacy. The CCW mandate has vaulted the challenge of dealing with killer robots to the top rank of traditional multilateral arms control and humanitarian disarmament, validating the importance and urgency of the issue and undercutting arguments that these weapons are “inevitable” and “nothing to worry about.” The CCW meeting of experts is the first multilateral meeting on the matter, but it is unlikely to be the last. Campaigners believe that the agreement to work on the matter could lead to a new international law prohibiting fully autonomous weapons.

What is expected to happen at the experts meeting?
During the opening the chair will provide introductory remarks and there will be a general exchange of views where nations and other delegations can make brief statements. The provisional agenda follows the broad technical, ethical, legal, and operational parameters of the emerging international debate over these weapons with expert presentations aimed at stimulating discussion and interventions. At the conclusion of the meeting, the chair will present a draft report on the meeting and seek input on the way forward. The next annual CCW meeting on 14 November 2014 may see nations renew the mandate to continue the experts’ discussions or move to a different phase of a more formal negotiating process.

What are the main arguments expected during the experts meeting?
The first session focuses on technical challenges opens with a debate between roboticists Professor Noel Sharkey, chair of the International Committee for Robot Arms Control (ICRAC), and Professor Ron Arkin from Georgia Tech. Prof. Sharkey has long expressed concern that autonomous weapons systems cannot be guaranteed to predictably comply with international law and stresses that the weapons must remain under human control. ICRAC is a co-founder of the Campaign to Stop Killer Robots, which seeks a preemptive ban. Prof. Arkin, on the other hand, has argued for the development of an “ethical governor” software to ensure “ethical adherence” by autonomous systems capable of lethal action in narrowly-bounded circumstances.

During the legal session, the Campaign and others will make the case that fully autonomous weapons are unlikely to be able to comply with international humanitarian law and that a preemptive ban is needed. They will urge nations to invoke the Martens Clause, which requires that states take evolving public perspectives into account when determining whether weapons such as killer robots can meet the “dictates of public conscience” and the “principles of humanity.” Others are expected to argue that international law is sufficient to address concerns expressed over fully autonomous weapons and no new rules are needed.

How are countries likely to contribute to the experts meeting?
Ambassador Jean-Hugues Simon-Michel of France is chairing the CCW meeting of experts and has recruited Brazil and Germany to serve as “friends of the chair” to chair respectively the sessions on ethical and societal concerns and technical issues. According to the provisional agenda (22 April), military and technical experts from France, Japan, US, and elsewhere will provide presentations. At least 44 nations have made statements on this subject, but few have used those opportunities to discuss their own policy and practice in any detail. The CCW process should spur governments to acknowledge their practice on fully autonomous weapons and develop policy aimed at regulating or banning the weapons. Poland’s Ambassador Remigiusz A. Henczel will chair the next annual CCW meeting, where on 14 November 2014 nations will take a decision on whether to continue the work on killer robots.

Who is attending the experts meeting from the Campaign to Stop Killer Robots?
The Campaign to Stop Killer Robots delegation to the CCW meeting of experts is comprised 40 campaigners from 12 member NGOs in countries including Austria, Canada, Germany, Japan, the Netherlands, Switzerland, UK, and US. Hi-level representatives include Nobel Peace laureate Ms. Jody Williams, former UN disarmament chief Ambassador Jayantha Dhanapala of Pugwash, and Ms. Yukie Osa, the president of Association for Aid and Relief Japan, the country’s largest humanitarian and disaster relief organization. As with the precedent set by previous CCW discussions and negotiations on other issues, the Campaign to Stop Killer Robots will take its seat at the table at every CCW session, as well as make statements, circulate documents, and host side events.

Where are the women at the experts meeting?
The provisional agenda of the CCW meeting of experts does not list any women to present on or chair any sessions. The Campaign to Stop Killer Robots has offered its female experts, which comprise half of the global coalition’s 40-person delegation to the CCW meeting, including side event presenters:

See the Sharron Ward’s video for the campaign on the CCW experts meeting: