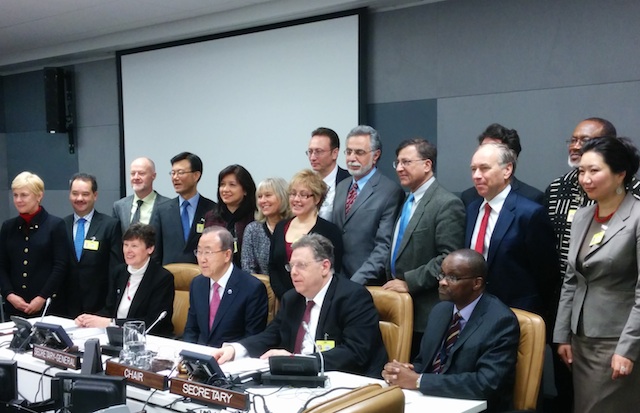 In early March, members of the Campaign to Stop Killer Robots briefed United Nations Secretary-General Ban Ki-moon’s advisory board on disarmament matters on the emerging international concern over killer robots. The UN Secretary-General himself spoke about autonomous weapons systems at the board’s meeting on 7 March and encouraged its members to continue looking at what can be done about the weapons.

On 5 March, physicist Dr. Mark Avrum Gubrud from the International Committee for Robot Arms Control (ICRAC) briefed the board for almost three hours on emerging military technologies, particularly autonomous weapons systems. He highlighted the dangers of new arm races and proliferation as major powers pursue this emerging technology. Gubrud described how the moral and philosophical foundation for a ban on autonomous weapons could be affirmed by using the principles of human control, responsibility, dignity and sovereignty. Human control would require that any use of violent force be initiated only by human decision and kept fully under human control.

On 7 March, philosopher of technology Dr. Peter Asaro, a co-founder and vice-chair of ICRAC, addressed the board on civil society concerns with autonomous weapons and described the coordinated NGO response provided by the Campaign to Stop Killer Robots. He highlighted the need for a clear norm to ban the weapons through new international law and cautioned against adopting a wait-and-see approach that allows unsafe systems to be developed and fielded. Asaro said the campaign views the Convention on Conventional Weapons experts meeting as the beginning of a process that should lead to new international law in the form of a preemptive ban on fully autonomous weapons.

This is not the first time that members of the Campaign to Stop Killer Robots have addressed the UN Secretary-General advisory board. In June 2013, Maya Brehm of Article 36 spoke to the previous board meeting, introducing our campaign, its concerns, and call for a ban on fully autonomous weapons.

On killer robots, the last report of the advisory board issued on 27 July 2013 (A/68/206) states: “The Board noted that the increasing trend towards automation of warfare and the development of fully autonomous weapon systems (also referred to as lethal autonomous robotics, LARs, or killer robots) gave rise to a wide range of legal, ethical or societal concerns that had to be addressed. These could include, inter alia, the ability of a fully autonomous system to conform to existing law (including international humanitarian law, human rights law or general international law); potential problems associated with the design of future fully autonomous weapons that could require disarmament action, or the ethical limits to robotic autonomy in deciding on the life or death of a human, to quote just a few.”

The July 2013 report urged immediate action on the matter, stating “the United Nations should be seized of the implications on international peace and security of rapidly emerging new technologies and recommended that the Secretary-General should take this issue in hand and emphasize the possible inherent dangers of weapon systems whose course of action is determined by machine algorithms.”

The advisory board recommended that the UN Secretary-General commission a study on “emerging technological trends and the legal, ethical and other aspects of and limits to the development, proliferation and use of the increasingly autonomous weapons technology,” then on the basis of that study promote “coordinated efforts in an existing forum,” specifically the Convention on Conventional Weapons. It proposed that an alternative to CCW would be the “establishment within the United Nations framework of a structured intergovernmental dialogue and formalized exchange on the emerging technologies to address the possible need for disarmament measures in respect of potential future fully autonomous systems.”

It is not known if the study is will be undertaken after nations agreed by consensus in November 2013 to start discussing lethal autonomous weapons systems at the Convention on Conventional Weapons. The first meeting of CCW experts will take place on 13-16 May.

At the meeting on March 5, UN disarmament chief Angela Kane thanked the advisory board for its “big impact” in seeing its recommendation for CCW work (“a good and well-timed idea”) agreed to. She noted that the CCW mandate has “helped to reaffirm the central relevance of the United Nations in the field of disarmament.” Kane made some good points about the need for action now to address fully autonomous weapons as “history has shown us that we do not need to wait for a threat to emerge fully before we can take action.” She also said that “the mere existence of an international legal obligation is often not enough” to rein in technology such as fully autonomous weapons.

In his remarks to the advisory board on March 7, UN Secretary-General Ban Ki-moon said that he shares the advisory board’s “concerns and conclusions” about autonomous weapons and believes the “most important thing” is the board’s 2013 recommendation that a “comprehensive study” be undertaken. Ban Ki-moon said that the matter should “possibly” be addressed through “disarmament action” and urged that states consider “all aspects” of the weapons, including “their potentially grave humanitarian impact.”

Several board members are believed to support a ban on fully autonomous weapons, but it is not known if that is a view accepted by all. The July 2013 report states:

The UN Secretary-General made his first remarks on the fully autonomous weapons in his November 2013  report on the protection of civilians in armed conflict, calling for international discussions to begin immediately and “not once the technology has been developed and proliferated” and urging that any process “be inclusive and allow for full engagement by United Nations actors, ICRC [International Committee of the Red Cross] and civil society.”