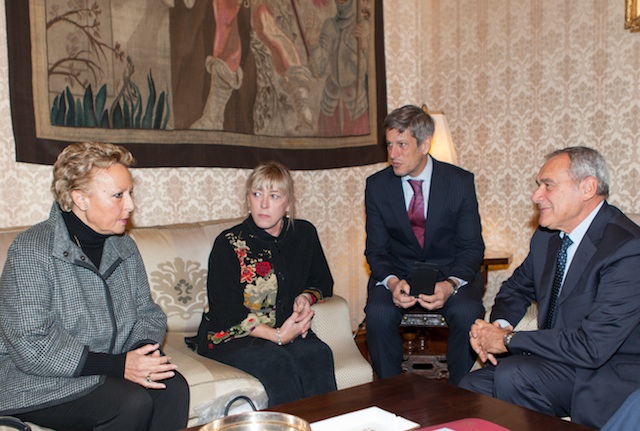 Italy’s top political leadership has been briefed by Nobel Peace Laureate Jody Williams of the Nobel Women’s Initiative and Italian non-governmental organizations on the need for the government to support the call for a ban on fully autonomous weapons and play an active role in international efforts to address the weapons. The outreach in effect marks the public launch of the Italian Campaign Stop Killer Robots or Campagna Stop Killer Robots in Italia, which is coordinated by the Italian Network for Disarmament (Rete Italiana per il Disarmo).

On 13 November, Williams and campaign representatives met with Italy’s foreign minister and leading parliamentarians in Rome. There was also an impromptu exchange with Prime Minister Enrico Letta, whose coalition government assumed office on 28 April 2013.

Meanwhile at the United Nations in Geneva, Italy made its first public statement on the topic at the Convention on Conventional Weapons. Italy’s new disarmament representative, Ambassador Vinicio Mati, said: “We are conscious that such weapons are not operational yet and that nobody can predict what their impact on [international humanitarian law] would be. However, we deem it appropriate that the international community starts an evaluation of this possible impact.”

Over the course of the week of CCW meetings Mati made several interventions in support of the draft CCW mandate to hold experts discussions on what he called lethal autonomous weapons or “the so-called killer robots.”

At her meeting with Williams, Bonino said she has a copy of the 2012 Losing Humanity report by Human Rights Watch in her office. She agreed on the importance of Italy engaging in the debate on this challenge and on the need to closely monitor developments in military research. Italy will hold the presidency of the European Union in the second half of 2014 and Bonino and Williams discussed the need for the EU to address the challenges posed by fully autonomous weapons. In May, the EU recommended that killer robots be considered by the CCW and it participated in the CCW meeting, where it made another statement of support for the mandate.

Williams and 21 other influential women are on the board of “Women in Diplomacy,” a new international committee created by Bonino. Williams talked about the Campaign to Stop Killer Robots in her keynote address to a dinner held after the board’s inaugural meeting. During the event, Williams also had a brief exchange with Prime Minister Letta, who expressed interest in the campaign initiative and objective of a preemptive ban.

Earlier in the day, at a packed hearing by the Senate Commission on Foreign Affairs and the Committee on Human Rights, Williams urged the senators and parliamentarians present to consider what could be done domestically to support the campaign’s call for a preemptive ban on fully autonomous weapons.

Williams and Italian campaigners discussed fully autonomous weapons and the campaign for almost an hour with the President of the Italian Senate, Pietro Grasso and Senator Silvana Amati, a long-time supporter of humanitarian disarmament efforts. Williams, Amati, and a member of the lower chamber of parliament, Giulio Marcon, spoke at a public meeting hosted by Parliamentarians for Peace to discuss fully autonomous weapons and new campaign.

Williams subsequently spoke again on killer robots in Milan on 15-16 November in a keynote address for an international conference on Science for Peace.

She told il Fatto Quotidiano (a daily newspaper) that Italy was once among the world’s leading manufacturers of landmines, but became one of the most active supporters of the ban on their use. Even if Italian industry participates in the development of  killer robots, Williams expressed hope that the government would work actively at the diplomatic level to ban these weapons. Italy is already proving it wants to address the challenge through the Convention on Weapons Conventional in Geneva, which has decided to add fully autonomous weapons to its program of work. This is an first important result of our campaign.

“The past few days have been very important for the Italian Campaign Stop Killer Robots,” said campaigner Giuseppe Schiavello in a statement commenting on the domestic outreach and CCW agreement to start working on fully autonomous weapons.

In media interviews with Vatican Radio and other Catholic media, Williams said the campaign hopes that Pope Francis will support the call for a ban on fully autonomous weapons.

Media coverage of the issue by L’Espresso, Wired Italia, AVVENIRE, Famiglia Cristiana and other outlets has helped build public interest, resulting in a significant increase in the number of the Italians following the international campaign’s Facebook and Twitter accounts.

The Italian campaign has translated a number of campaign materials, including the recent Q&A issued by Human Rights Watch.