Campaigning at the UN in New York 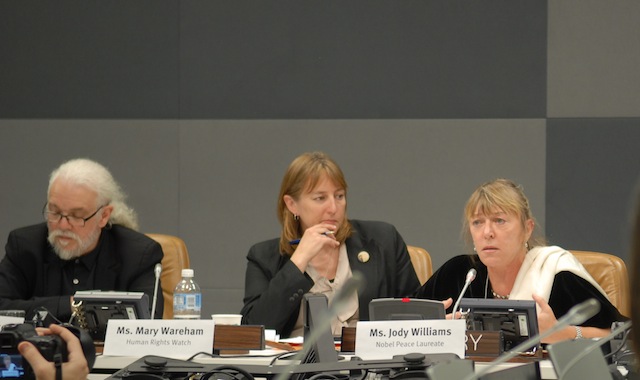 At the newly refurbished United Nations in New York this month, there have been several signs that momentum is building behind calls for international talks on fully autonomous weapons, also known as “lethal autonomous robots” or “killer robots.” The evidence that this issue has arrived could be seen everywhere during the UN General Assembly First Committee on Disarmament and International Security, from packed side events to bilateral consultations with delegations, statements to the plenary, and in media coverage.

At the side event convened by the Campaign to Stop Killer Robots on Monday, 21 October, Nobel Peace Laureate Jody Williams said, “I don’t want to see robots operating on their own, armed with lethal weapons” and asked the audience, “Do we really want to go there?” Professor Noel Sharkey of ICRAC described precursors to fully autonomous weapons as “systems that can select targets on their own and attack them on their own.” He presented a statement signed by 272 scientists in 37 countries that urges the retention of human judgment in decisions on targeting and the use of force. Richard Moyes of Article 36 said that discussing existing autonomous weapons systems would be helpful in developing the definition of what is “meaningful” or “adequate” human control. He urged a focus on where to draw the line on the level of human control over the use of force.

In the discussion that followed, Egypt read its statement from the First Committee (below). France commented that governments and civil society must address this complex issue together and said it had been consulting with states on a mandate for discussions at the Convention on Conventional Weapons (CCW), where it will propose in November a diplomatic mandate for talks on fully autonomous weapons in 2014. Switzerland welcomed the civil society campaign and said the topic must be discussed in a forum with the key actors.

UNIDIR held a side event on Tuesday, 22 October that featured a presentation by Professor Christof Heyns, who in his capacity as UN Special Rapporteur on extrajudicial, summary or arbitrary executions, issued a report earlier this year on fully autonomous weapons that raised moral, ethical, legal, policy, technical, and other concerns with the weapons. His report calls for a moratorium on fully autonomous weapons and for a high-level panel to propose the necessary international framework to address them.

At the side event, Heyns described fully autonomous weapons as “one of the most interesting topics” that he has ever dealt with as rapporteur. He said that no single forum can deal comprehensively with this topic as so many issues are involved and commented that “there is a window of opportunity for the international community to debate this technology before it is used, unlike nuclear weapons.”

Several heads of delegation attended both side events, including Michael W. Meier for the United States.

As of 23 October, at least four states had spoken on fully autonomous weapons in the plenary of the First Committee deliberations:

The work on killer robots at the UN in New York has attracted strong media interest with articles by TIME World, Computer World (in German), Fast Company, NBC News, and VICE, an op ed in SBS News, and blog post by Just Security, Take Part, and Toward Freedom.

On 15 November 2013 , nations participating in the Convention on Conventional Weapons meeting in Geneva will decide whether to put fully autonomous weapons on the CCW’s program of work for 2014.