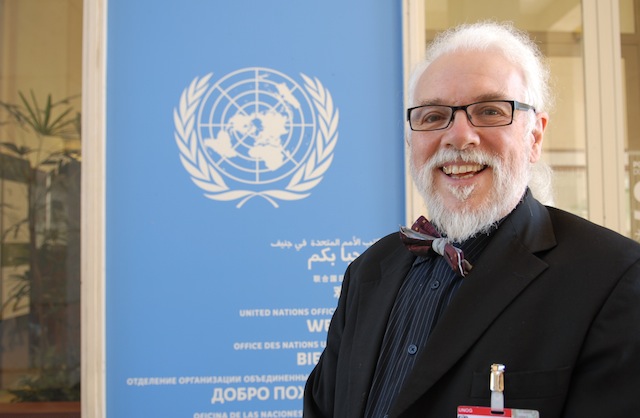 At an event at the United Nations in New York today (Monday, 21 October), representatives of the Campaign to Stop Killer Robots urged all nations to agree to begin international talks aimed at preventing the creation of fully autonomous robot weapons that, once activated, would select and engage targets without human intervention.

“Governments should never relinquish human control of targeting and attack decisions to machines,” said Nobel Peace Laureate Jody Williams of the Nobel Women’s Initiative, a founding member of the Campaign to Stop Killer Robots. “To prevent this method of warfare from ever coming into existence, nations need to start working on both national prohibitions and an international ban now. I don’t want to see robots operating on their own, armed with lethal weapons.”

In recent months, fully autonomous weapons—also called “lethal autonomous robots” or “killer robots”—have gone from an obscure, little known issue, to one that is commanding the attention of many governments, international institutions, and civil society. Fully autonomous weapons do not yet exist, but several robotic systems with various degrees of autonomy and lethality are currently in use by the US, Israel, South Korea, and the UK, while other nations with high-tech militaries, such as China, and Russia, are believed to be moving toward systems that would give full combat autonomy to machines.

This year, the United Nations special rapporteur on extrajudicial, summary or arbitrary executions, Professor Christof Heyns, issued a report calling on nations to institute an immediate moratorium on fully autonomous weapons. His report also suggested that a high-level panel consider the issue. At a UN Human Rights Council debate on the report on 29 May, more than two dozen countries spoke on the issue for the first time and all agreed that the prospect of fully autonomous weapons requires urgent international action.

Austria, Egypt, France, Pakistan and other nations called for international talks on fully autonomous weapons during the UN General Assembly First Committee on Disarmament and International Security in New York this month. France, as chair of the next meeting of the Convention on Conventional Weapons, has been consulting to solicit support for adding fully autonomous weapons to the convention’s program of work.

“Governments need to listen to the experts’ warnings and work with us to tackle this challenge together before it is too late,” said Professor Noel Sharkey, Chair of the International Committee for Robot Arms Control (ICRAC), a founding member of the Campaign to Stop Killer Robots. “Without urgent action now, we may not be able to prevent the further development of autonomous robot weapons later.”

ICRAC has released a statement endorsed by 272 engineers, computing and artificial intelligence experts, roboticists, and professionals from related disciplines in 37 countries that calls for a ban on the development and deployment of weapon systems that make the decision to apply violent force autonomously, without any human control. The scientists’ statement questions the notion that robot weapons could meet legal requirements for the use of force “given the absence of clear scientific evidence that robot weapons have, or are likely to have in the foreseeable future, the functionality required for accurate target identification, situational awareness or decisions regarding the proportional use of force.”

In discussions with government and military officials, scientists, and the general public, representatives of the Campaign to Stop Killer Robots have encountered tremendous discomfort with the idea of allowing military robots to determine on their own if and when to use lethal force against a human being.

“Already we’re seeing an instinctive reaction from the public rejecting the notion of fully autonomous weapons and their views matter,” said Richard Moyes, managing partner at Article 36, a founding member of the Campaign to Stop Killer Robots. “While fully autonomous weapons are a concern of the future, existing technologies already press the boundaries of autonomy, demonstrating the urgent need to establish a legal obligation for meaningful human control of robot weapons.”

A June 2013 national representative survey of 1,000 Americans found that, of those with a view, two-thirds came out against fully autonomous weapons: 68 percent opposed the move toward these weapons (48 percent strongly), while 32 percent favored their development. Interestingly, active duty military personnel were among the strongest objectors—73 percent expressed opposition to fully autonomous weapons. The Martens Clause, a provision of international law, requires that states take into account the “dictates of public conscience.” States should consider these kinds of public reactions to fully autonomous weapons when determining the public conscience.

The Campaign to Stop Killer Robots is calling on states to put in place a comprehensive ban on fully autonomous weapons that would be able to select and attack targets without any human intervention. This prohibition should be achieved through an international treaty, as well as through national laws and other measures, to enshrine the principle that decisions to use violent force against a human being must always be made by a human being.