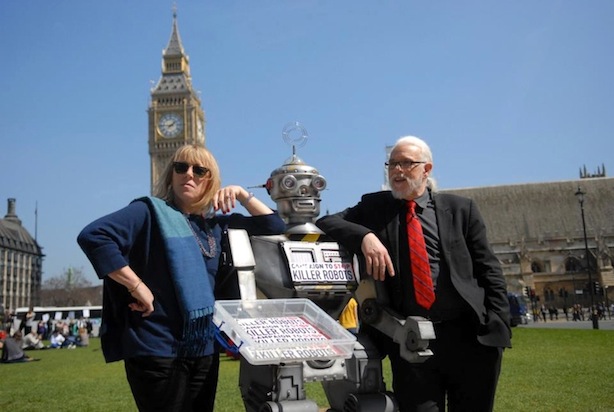 This week saw the launch of the international Campaign to Stop Killer Robots in London with a series of events to brief activists, media, and parliamentarians.

A conference for non-governmental organizations (NGOs), held at the Human Rights Action Centre on Monday, April 22, was attended by about 65 campaigners from 30 NGOs. The activists provided input and guidance on an initial work plan that will chart the way forward for the new campaign.

On Tuesday morning, a news conference at the Frontline Club attracted a strong turn-out and was accompanied by significant online interest, especially on Twitter where the campaign’s handle is @BanKillerRobots. A visual stunt held in Parliament Square during the lunch hour featuring a vocal “friendly”  robot campaigner handing out bumper stickers proved popular with media as well as tourists and especially youth.

Some new allies came forward during the launch briefing at Parliament on Tuesday afternoon, including Admiral Lord West, who said: “I find the idea of artificial intelligence doing targeting and weapon delivery quite abhorrent and I believe we need to do something to make that illegal globally and I think it is extremely dangerous.” Lord Toby Harris MP commented that it is important to distinguish between drones and fully autonomous weapons and emphasized, “the human element is key.”

A UK Ministry of Defence spokesperson responded to media, “There are no plans to replace skilled military personnel with fully autonomous systems. … Although the Royal Navy does have defensive systems, such as Phalanx, which can be used in an automatic mode to protect personnel and ships from enemy threats like missiles, a human operator oversees the entire engagement.”

At the visual stunt, NGOs delivered a sign-on letter to the government requesting that the UK elaborate its policy on fully autonomous weapons and support the call for a ban treaty. Article 36 issued a memo on UK policy, while Human Rights Watch released its review of a new US policy directive the week before the launch.

The campaign welcomes new members and is preparing for the release of the Heyns report to the UN Human Rights Council with campaign events planned in Geneva on May 28-29.